If you are looking for English language teaching jobs in Spain, you will often see that the employer will include “competitive salary” in their advertisement; but is it? A competitive salary by definition is a salary that is significantly above the norm. The typical salary for an English language teacher working in an academy is between 1000-1200€ gross per month for around 20-24 teaching hours respectively. This means a competitive salary would be at least 1200-1500€ per month right? Well in this article we will look at the ‘convenio collectivo’; this is the agreement which regulates English teachers’ salaries. 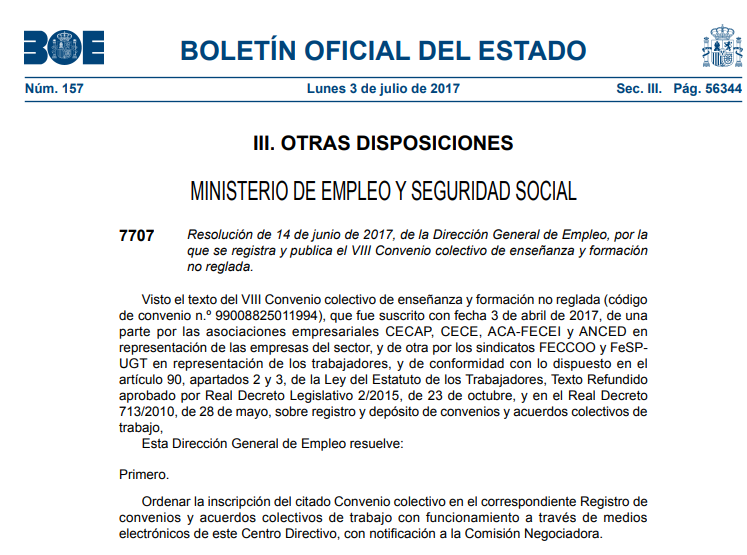 Teacher’s salaries in Spain are legally regulated by a collective labour agreement. In the case of English language teachers, the agreement is the Convenio Colectivo de Enseñanza y Formación no Reglada. This agreement is published each year in the BOE (Boletín Oficial del Estado) and can be checked online. It is not entirely clear who negotiates this convenio, but the BOE states:

One owner of a language academy in Madrid stated ‘I’ve been in the business for more than 10 years and have never dealt with any of them or been asked to become a member. I’ve never even heard of some of them’. That being said, the ‘convenio’ provides the following information:

The job categories covered by convenio agreement are as follows:

So let’s take a look at the “competitive salary” claim. In fig.1 you can see the table for base salaries (the legal minimum) from 2014-2017. These affect part time and full time contracts (per hour contracts are something each academy negotiates with the teacher and you can find more information from this link: Types of contract for English teachers in Madrid). When you do the simple calculation of dividing the annual salary of €14,243.06 by 12 months, you will find that you come up with a figure of €1187 per month. When you consider that this is the base salary, a “competitive” salary of €1200 isn’t really competitive… well, it isn’t actually competitive at all. 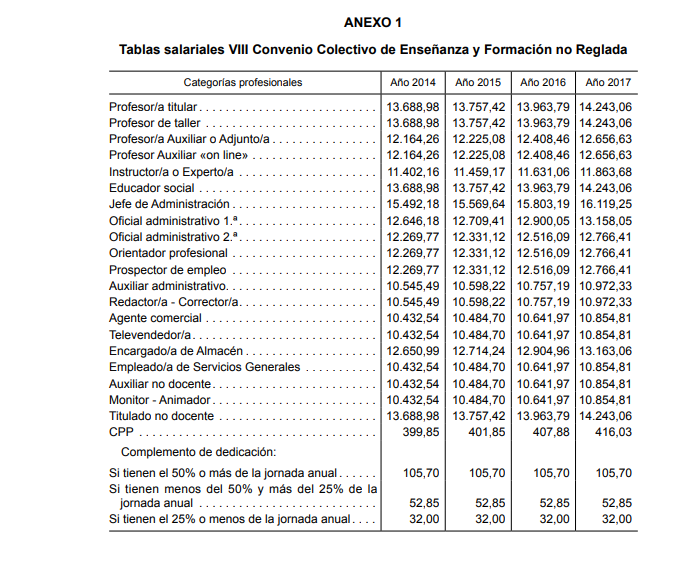 Ok, many academies will factor in paid holiday periods, of which there are many in Spain – a week during Easter, three weeks at Christmas plus 13 public holidays, many of which are known as “un puente” (a bridge) because the holiday falls in the middle of the week and people tend to take all the days in between off too to make for a long weekend. Nevertheless, this is not really an added bonus.

Time off during school holidays is one of the few perks of working in education, and academies don’t have any students during the public holiday periods. Furthermore, the vast majority of academies in Spain close during the summer months because, due to the Mediterranean culture of taking the whole of July and August off to go on holiday, there are no students to teach. This means that your contract is not actually for twelve months but nine (academies usually close at the end of June and don’t reopen until midway through September or the first week of October). When you’re only taking home €1000-1200 per month, you really need to be earning during those 12 months, which means working in a summer school for a few weeks – probably in the UK, which is going to incur flight costs.

There are many different types of contracts that are offered to English teachers in Spain, and it really is up to you as to what you are willing to accept in order to enjoy living la vida española. But always remember this; as an English teaching professional, you are providing your students with a life skill that will improve their career and studying prospects all over the world and, in the long run, give them opportunities to increase their earning potential. If you have the qualifications and the experience, you should never sell yourself short.

Further details from the ‘convenio colectivo’

Below are further details about your working rights that can be found in the convenio:

Cease of activity. Rights and obligations.

If a teacher wants to terminate their contract, they have to send a written notification to the company with a 30-day notice. If they don’t, the company can deduct two day’s salary for every day day up to the 30 days required. If the employee has notified his cease of activity correctly, the company is obliged to pay the amount required. If they don’t, they will have to pay two days for every day delayed up to a maximum of thirty.

Not registered on our site? Register and sign up for access to free lesson plans and teaching materials. 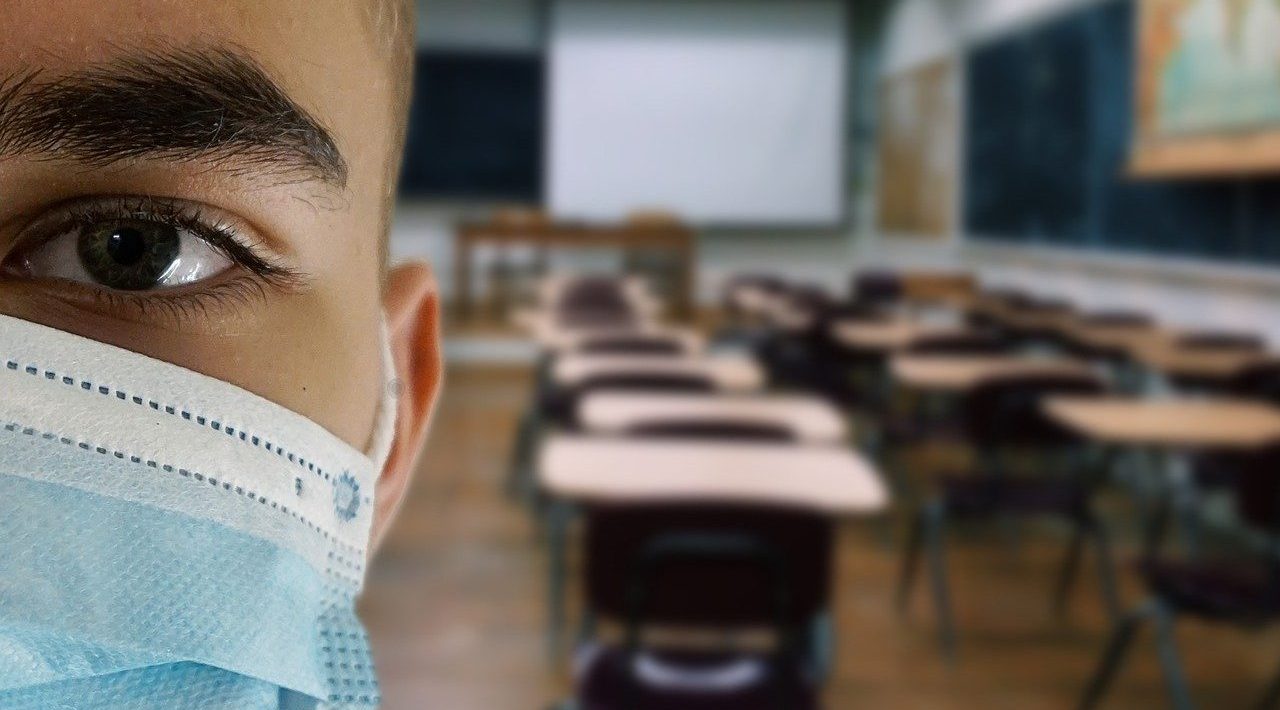 The Benefits of Teaching in the Zoom Classroom

Since COVID19 disrupted the world as we knew it, we have all had to adapt to what is being called ‘the new normal’. But man has proven time and time again that he is nothing Read more…

First of all, let me start off by saying that despite the significant shortcomings I will highlight here, there was much to enjoy during my first summer school experience. This was mainly due to the Read more… 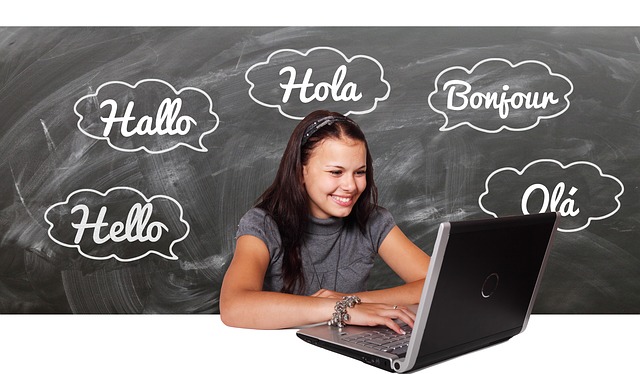 Teaching English as a foreign language (TEFL) has long been seen as a great way to work and travel. In Spain and other countries around the world, it is the go to job for English Read more…